I have a confession to make. I'm a little bit obsessed with buying vintage sewing patterns. This in of itself shouldn't really be that bad if those sewing patterns turned into future outfits...but...to be honest I just like collecting them. I find it hard to cut into a 50 year old pattern that still has its factory folds. Having said that, every now and then I buy a vintage pattern and instead of putting it straight into the cupboard I dare to cut it out and use it.

This pattern was one of those moments. I picked up Simplicity 6841 from Ebay about 6 months ago by accident as I was scrolling through listings looking for sewing inspiration and nabbed it straight away. Wiki informs me that this year actually marks the 50th anniversary of this pattern as it was released in 1966. I tell you, this pattern was looked after very well because she turned up in my post not looking a day older than 10! 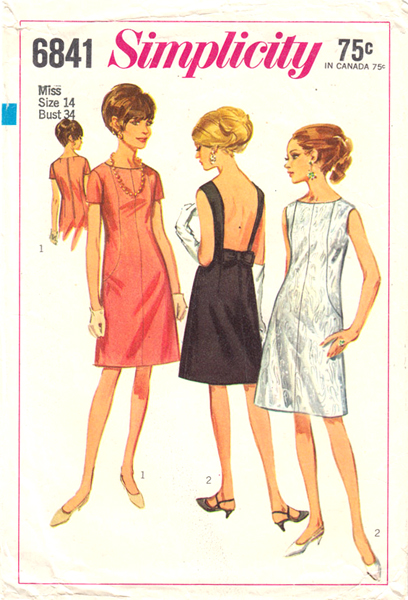 Simplicity 6841 is a classic 1960's A-line shift dress sillouette with two back options. I chose the backless sleeveless version that has a zipper down the back and a cute self fabric bow. I loved the seam detail on the front - just so vintage! I wanted to go authentic with my fabric choice on this one so I headed to Tessuti in Chatswood and picked up a wool fabric that has a bit of a boucle look about it with metallic thread weaved through it. It's not particularly noticeable in the photos but just gives the fabric a bit more of an evening look. 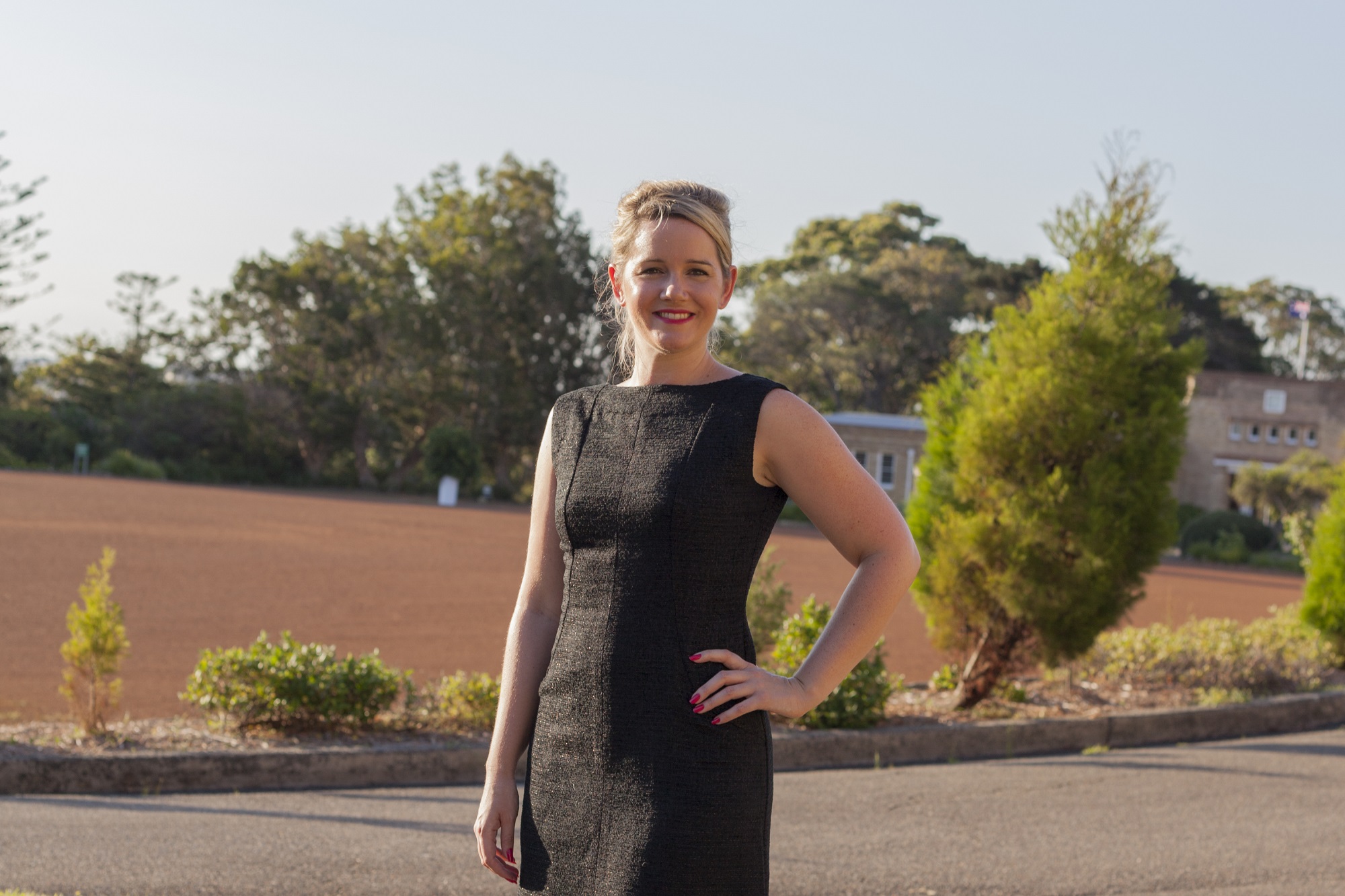 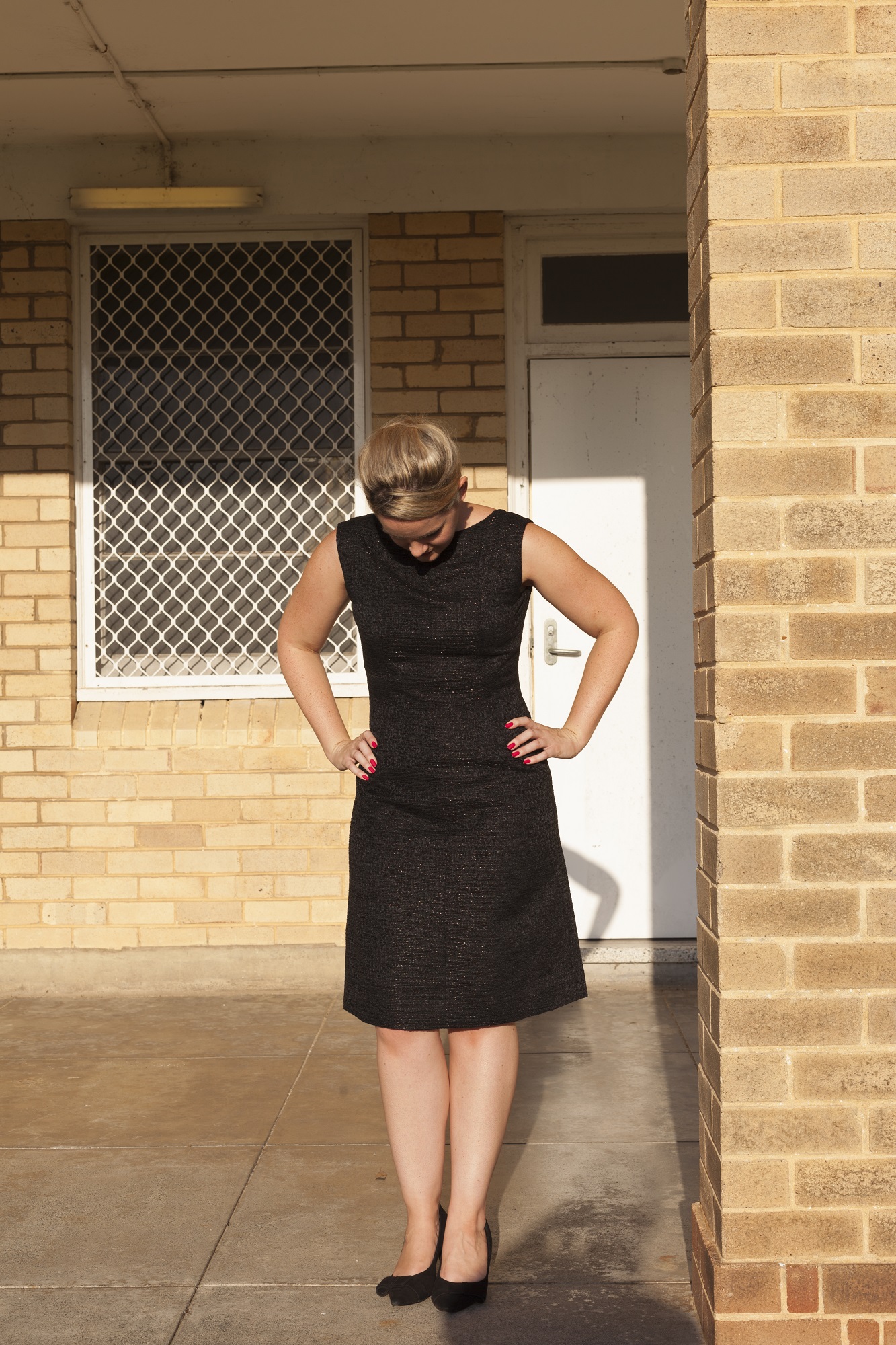 Because of my fear of cutting into this divine fabric and the fit not being right I actually mocked up a quick test version in cheapy fabric beforehand to ensure there would be no serious fit issues. There's a first for everything right? :) Turns out the size 12 was pretty bang on except that I graded out a little at the hips and took it in a little on the bust side seams. I also added about an inch to the length so it stopped right above the knees.

The dress is only interfaced so construction didn't take all that long. With the interfacing I used some Vilene interfacing I picked up at the Quilt & Craft show last year and I gotta say, I never really knew there could be such a difference to quality when it comes to interfacing! I used to use bog-standard stuff from Spotlight and I don't think I ever will again. I love the choice of Vilene interfacings for particular fabric weights and you don't get that ugly bubbling look on the fabric that you do from cheap interfacings. I'm telling you, try it out if you haven't. 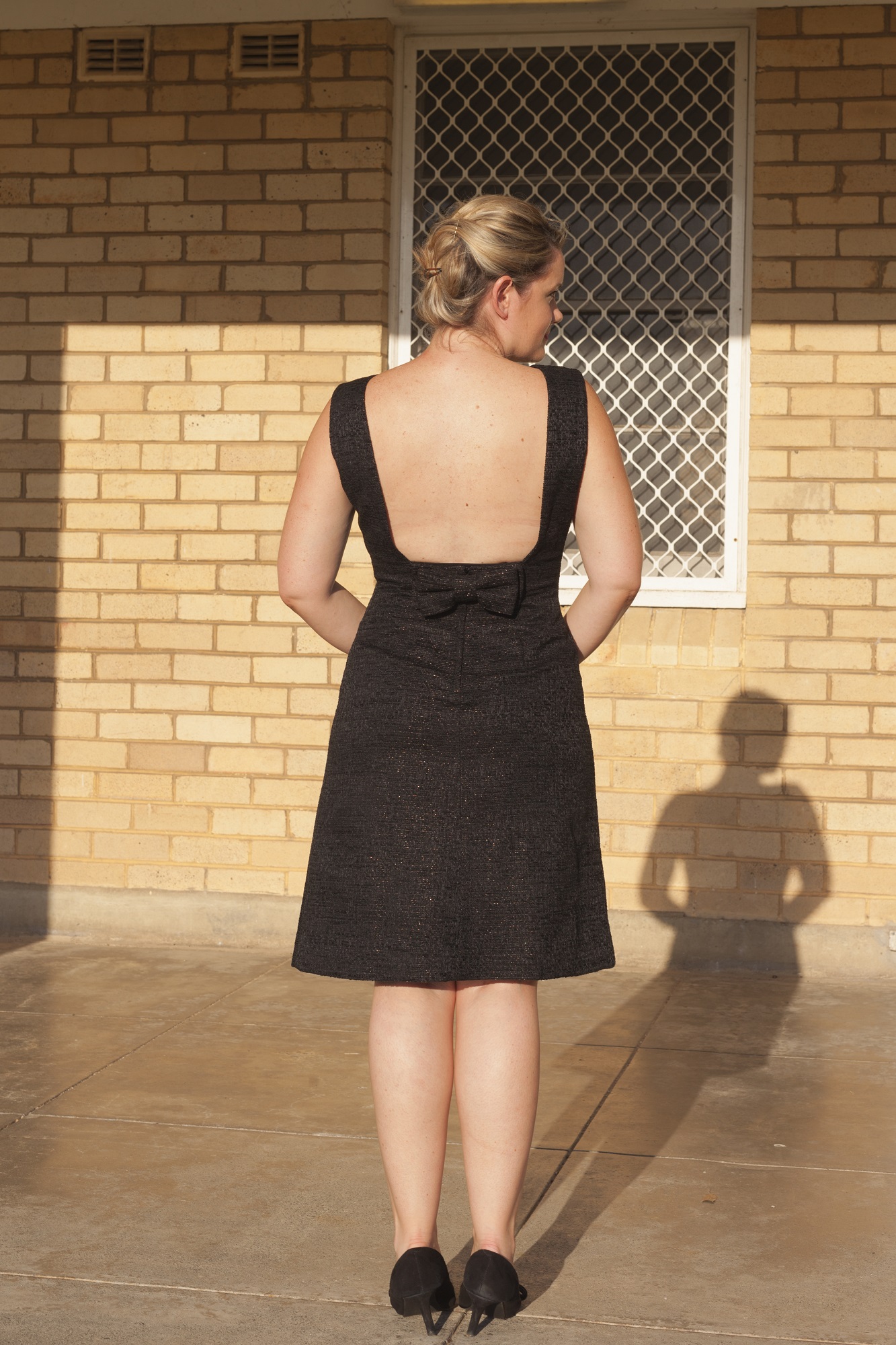 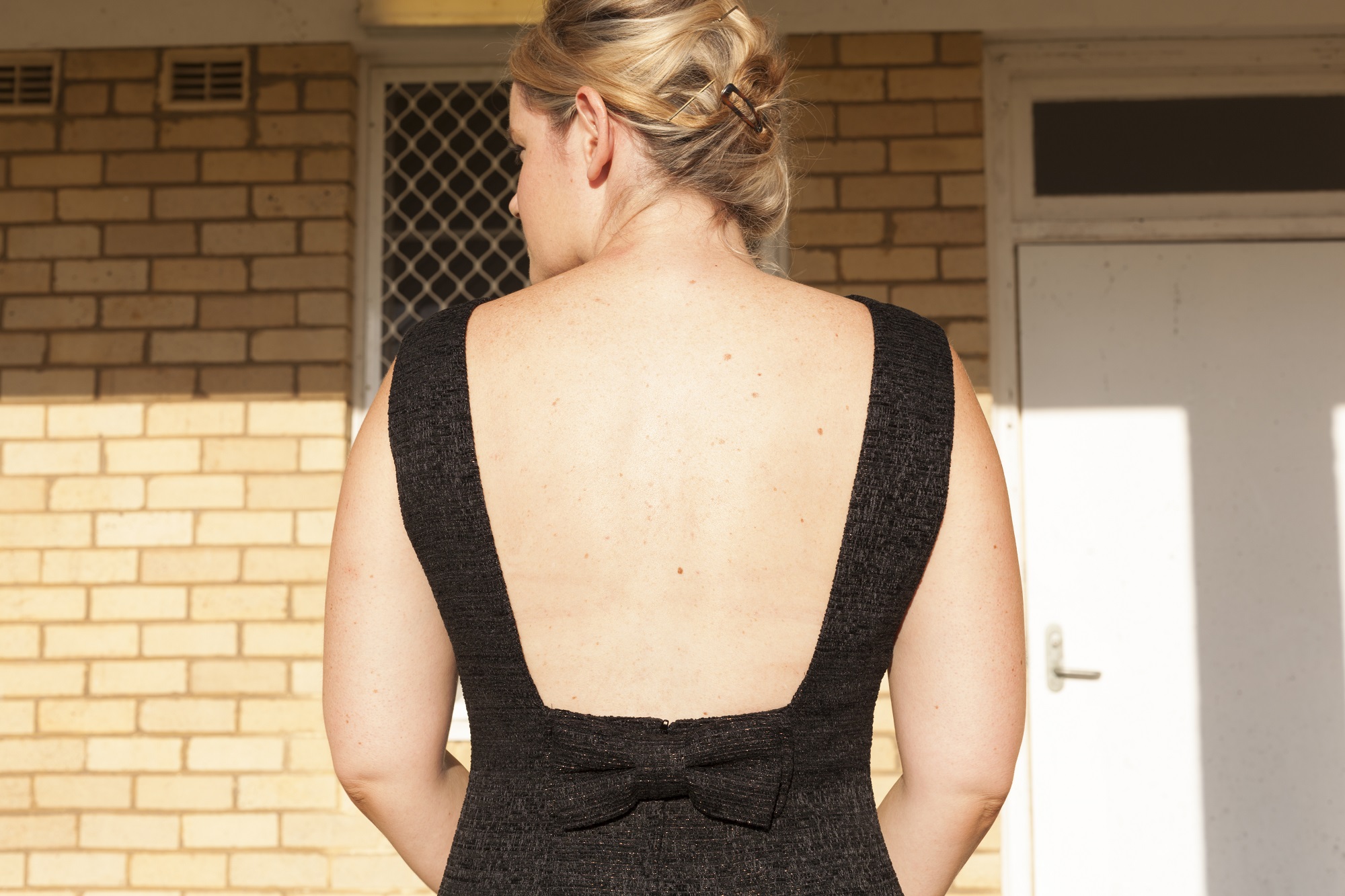 I finished the outfit by putting in a lapped zipper down the centre back which is largely hidden by the bow and the fabric choice. The bow is stitched down on one side and then I added black press studs on the other so you can access the zipper to get it on and off.

Overall I am really happy with how this turned out. Gotta love an outfit that says classy and subtle in the front and party in the back! 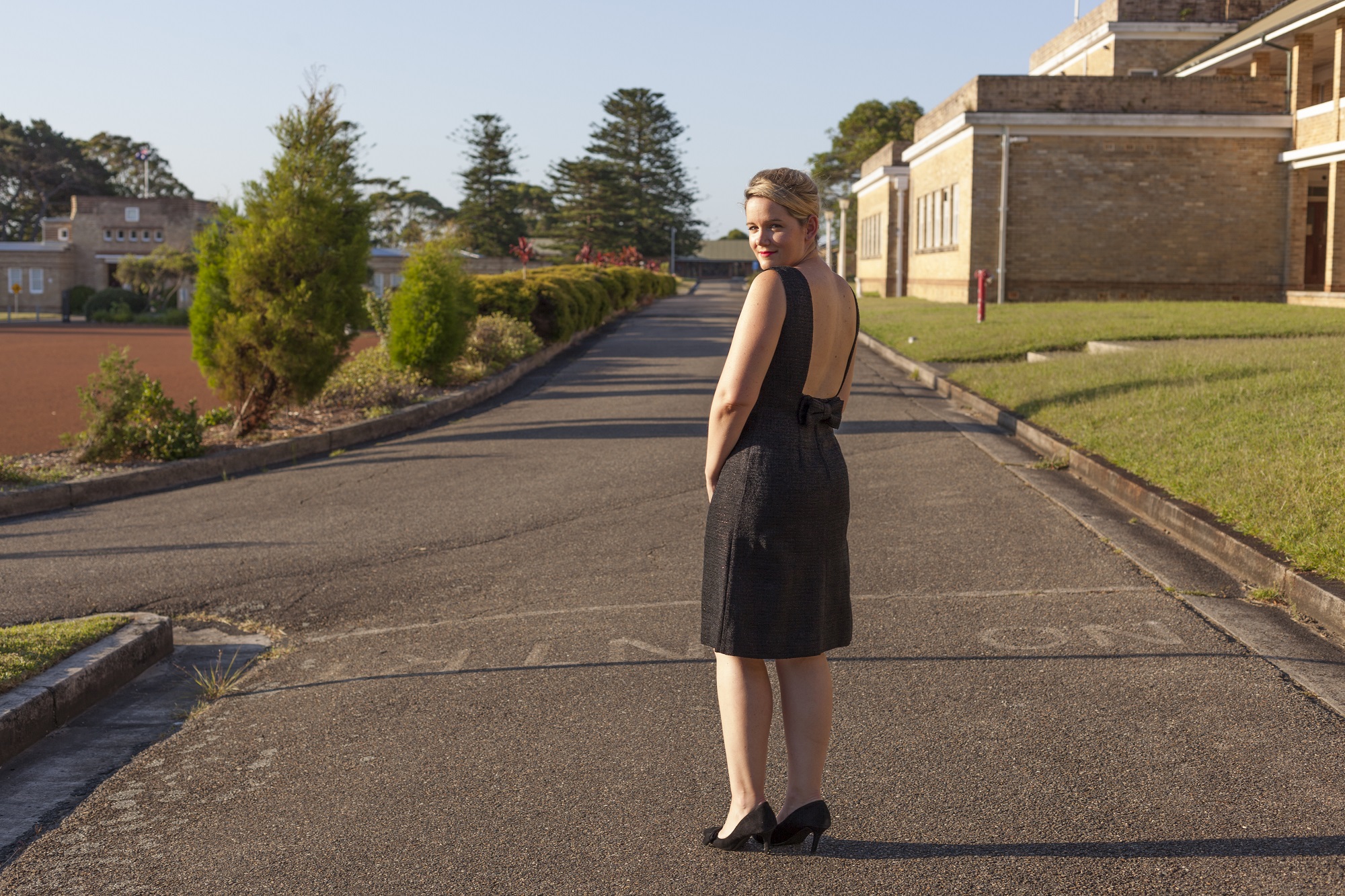 Wow! A fantastic, classy dress. You wear it well.

Such a gorgeous dress! I keep thinking that my wardrobe needs a little black dress, but the thought of sewing one doesn't get me excited. But your dress is definitely not boring!

Wow, what a fabulous dress. The fit looks great. I love how it's business in the front and then full on elegant party in the back!!

I love the simplicity (and style) patterns from this era, even for the artwork alone - so I know what you mean about just having them. Classic LBD with the party in the back ;o)

Same, it's a simple 60's shift staple but it works every time!

Wow!! What a fantastic dress! I have a slight obsession with vintage patterns too. How do you grade the sizes though? Any tips?

Thanks Jessica! To be honest I'm probably not doing 'proper' grading. I just add extra material to the side seams as that's normally where it gets tight. So when I cut out the pattern I just cut a little further out from the pattern piece. :)

Oooh...so happy to see you went with party in the back. You had me hoping right from the moment I saw the pattern jacket! Being one born in 1960, it's reassuring to see that some things from that decade age very well indeed. ;)

Stunning Bec! The fit is 100% and you look amazing. Nice work!

Thanks Em...thankfully it was an easy one to fit!

This turned out gorgeous! I may have to hunt for this pattern as well.

Amazing! I've had such luck with vintage patterns! Hopefully after this gorgeous number you can cut into a few more!

This is gorgeous! And well made!

This is very interesting. I love the style lines of this and since I was born in 1966 I may just have to track this pattern down and make it up. (or just go through my giant pattern stash to find something similar and modify it). You've done a lovely job with this make and it looks great on you. Thanks for sharing :)

This is so amazing! I've had this pattern in my stash for years and have been looking for an excuse to make it. I have an event coming up and this is one of the patterns I'm considering, so I did the usual google search and ended up here. Your gorgeous version has tipped the scales in favor of this pattern! Beautiful!