I made me a red dress using red wool crepe I bought last year in Italy. I had been petting it for some time almost too scared to cut into it, but the time was nigh. I had bought it knowing I wanted to make a vintage style dress for work and having now made it up, I am a little scared to wear it to work. It is REALLY red. 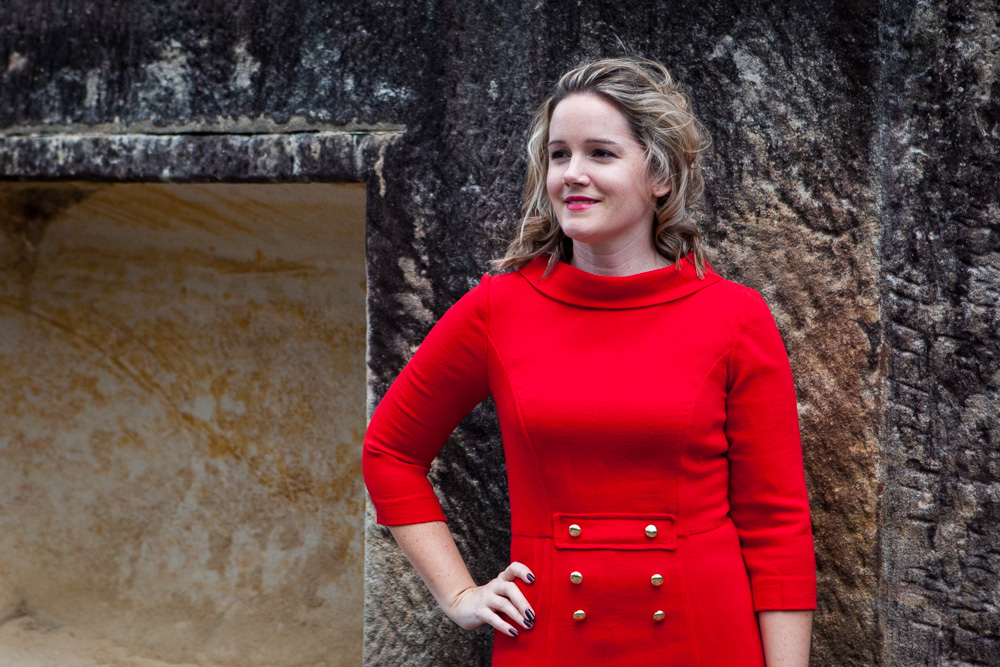 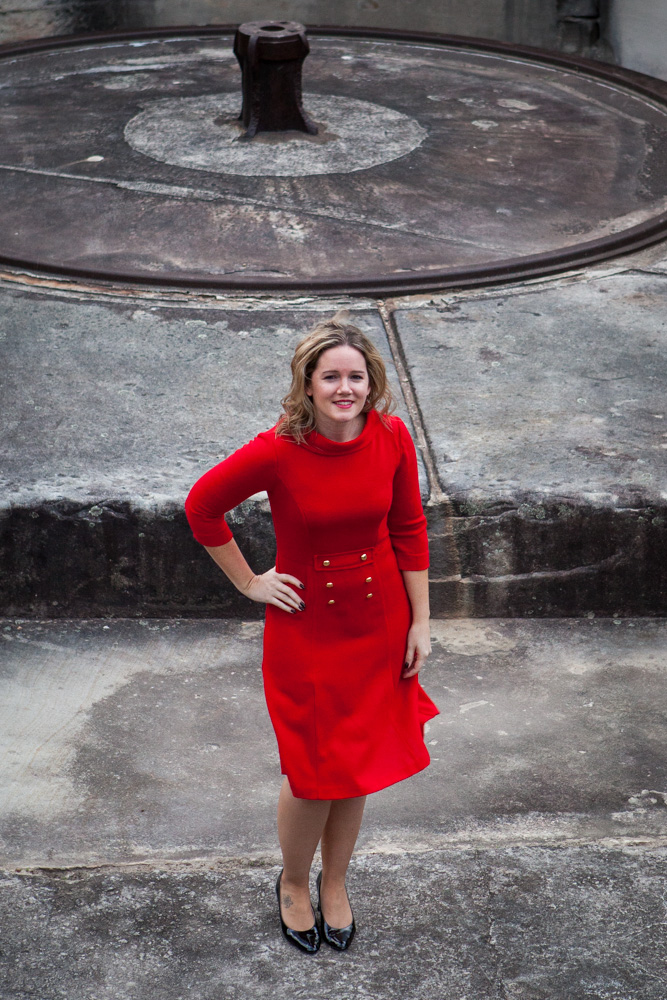 I bought Simplicity 1913 which is now out of print – for shame! I was taken by the collar and button detail down the front. I thought it was a little bit Peggy Olsen.  I kept with the mid forearm finish on the sleeves and opted for the gored skirt style, adding about 1.5 inches to the length of it so it fell under the knees. I cut out the pattern in a size 12  which was great for the butt but I did have to take it in along the princess seams on the bodice and side seams closest to the bust.

The wool crepe is a dream to work with but you do have to be conscious of fraying. It wasn’t a tightly woven fabric so I over locked all the seams whenever I could. You could think about doing French seams on the skirt bottom for a nicer finish but I took the lazy route. I lined the bodice with red bemsilk lining but I think a light voile fabric could have worked just as well and may have actually breathed a little better when wearing it. The fabric does feel a little sheer, especially when you have light behind you, so lining the bodice was a must and I hope I can get away with not having lined the skirt bottom. 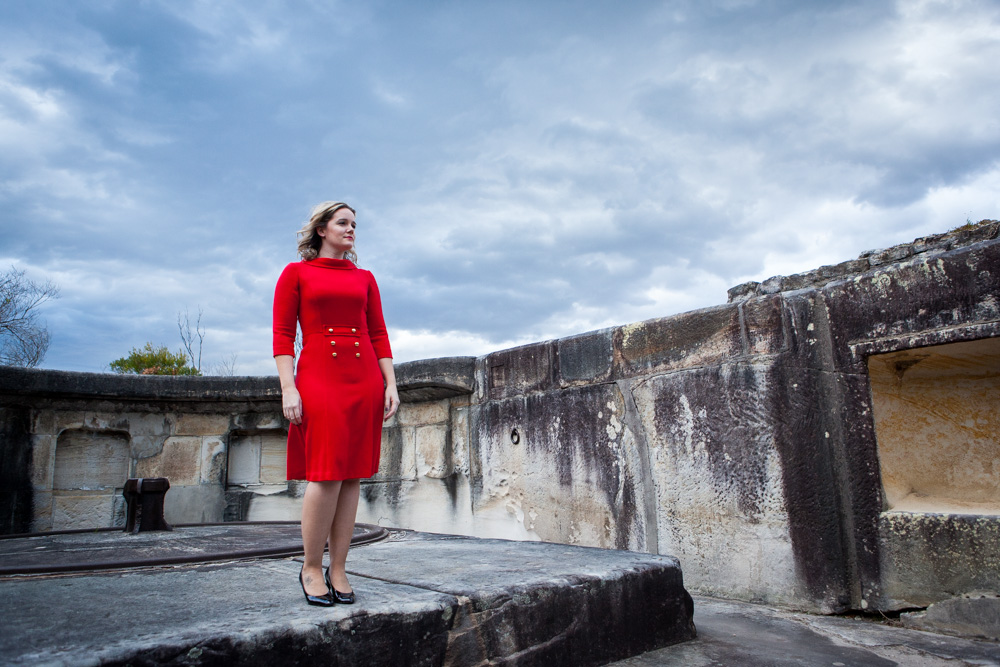 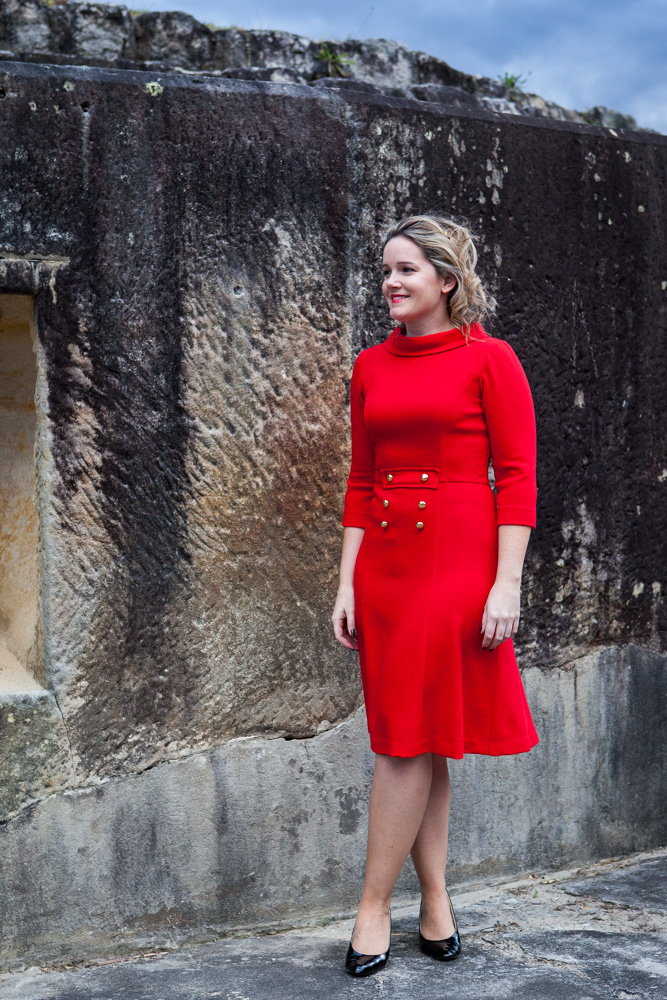 Sleeves are always a killer for me as I have chunky arm syndrome, so I had to take out the upper arm seam allowance and reduce to a 1cm seam allowance. Thankfully that did the trick and no adjustment to the bodice was needed as a result. To keep with the vintage vibe of the dress I thought I would give a lapped zipper a go. I have done a lapped zipper a while back on a vintage style dress on the side seam and struggled a little, not to mention the lapped part was back the front for the side of the dress, doh! I also did it by sight only and didn’t follow proper instructions. So this time I thought I would take the time and try and get this right. I sewed as I watched Sunni Standing’s brilliant Craftsy online tutorial called ‘Mastering Zipper Techniques’. The class takes you through how to do a number of zipper types including slot seam zipper, invisible zipper and lapped zipper insertion. As I followed the section on the lapped zipper it did feel like there’s a lot of work to put a zipper in but it might be because I am so used to doing invisible zippers which can be added to an outfit with an invisible zipper foot in no time. Once I got through the instructions and took some time out to really think about why you did certain steps I will say it is soo worth doing. It is probably one of those situations where the more you do it, the easier and quicker it gets. I was so happy with the outcome, I did a little happy dance in my flat. I think the zipper turned out perfectly on the dress. 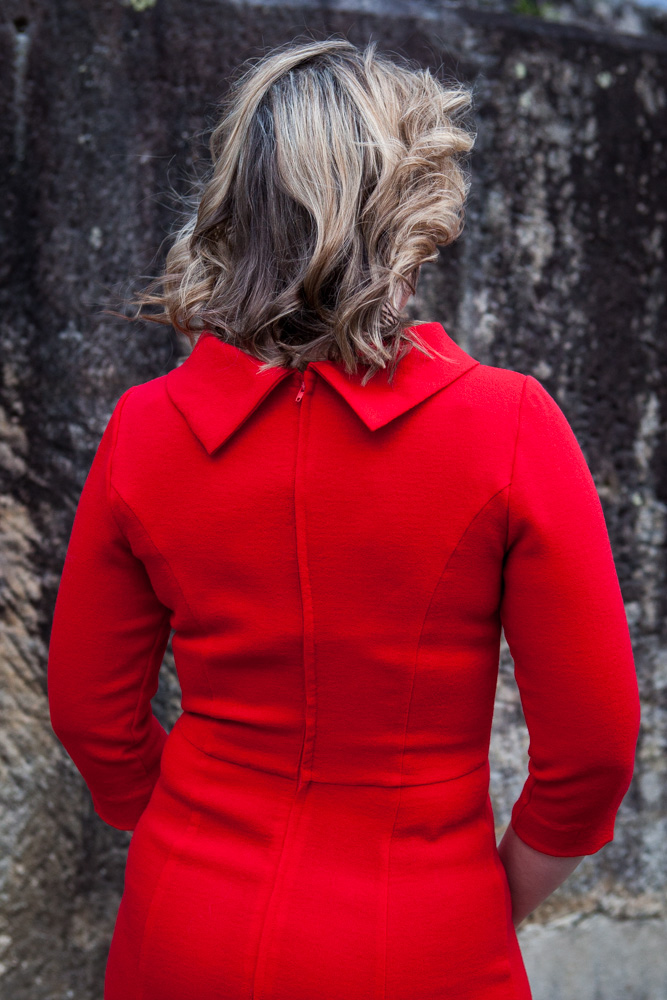 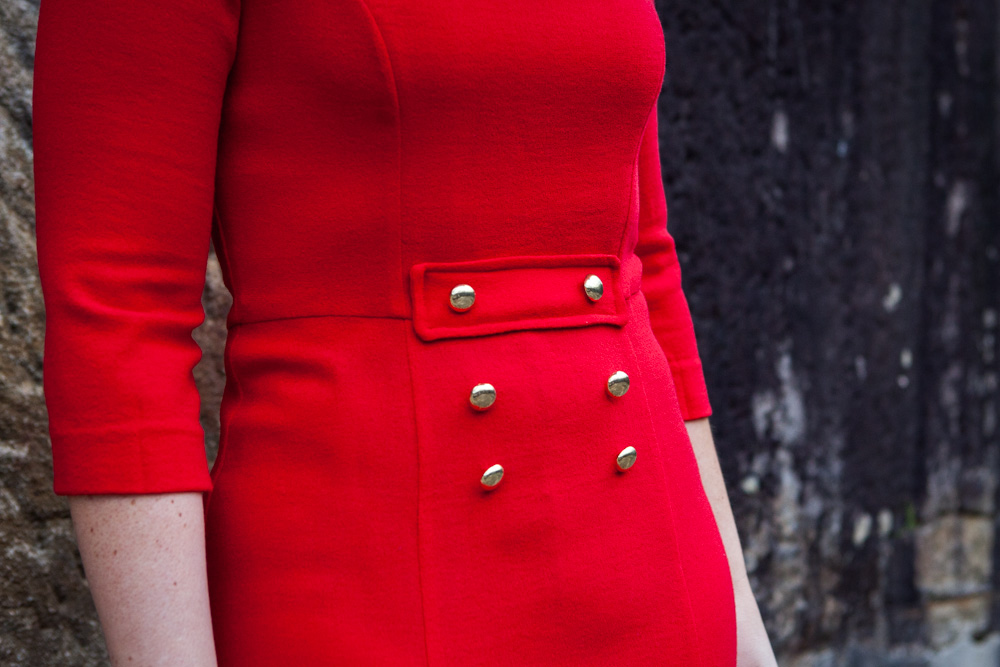 I finished off the dress with the tab detail and buttons on the front. I went back and forth about what kind of buttons I wanted on the dress. It had to be vintage style and I quite liked the gold buttons shown on the pattern envelope as initial inspiration. I decided on nautical style gold buttons but then came across these simple gold buttons in Lincraft and forged ahead with those instead. I always think the idea of buttons on outfits that aren’t functional a little strange but I think in this situation it kind of works. Last but not least, I finished off the hem with a one inch slip stitched hem. 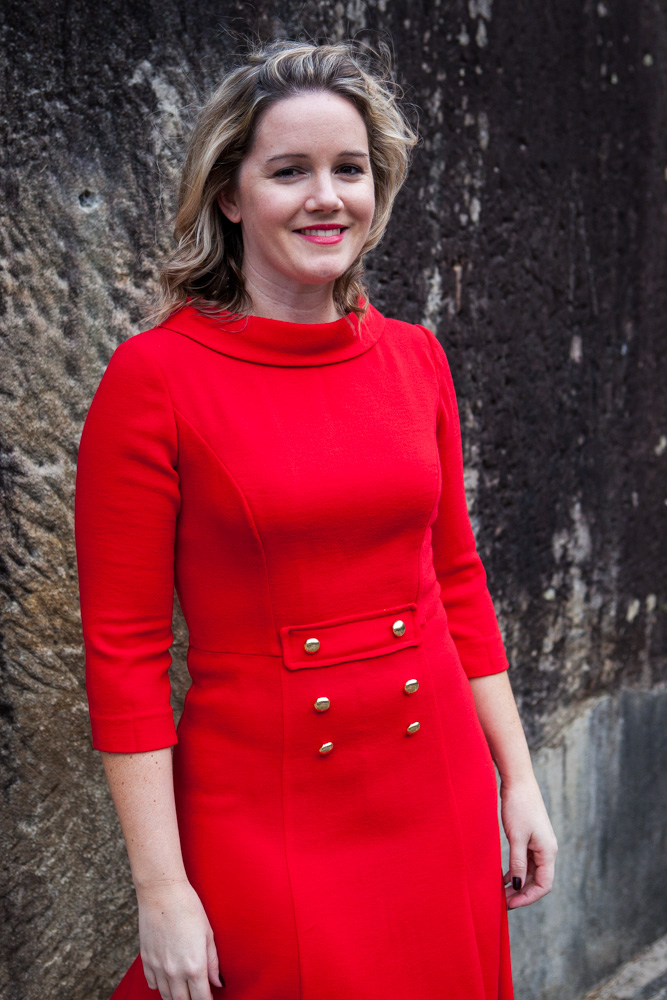 Now the big question is, can I wear this to work or not. Yes of course I can functionally, but do I fear being spotted from a mile off like a traffic sign. I think I still need to sit on this one a little longer. What do you in the internet world think??

Lastly, I thought I would mention where these images were taken. My talented little bro took these photos at the Middle Head foritifications in Sydney. It was designed as an outer Harbour defence fort designed to fire at enemy ships as they entered through Sydney Heads. It isn't active now, but kept as heritage listed. The views are amazing! We got the photos done just in time before gail force winds took over. As you can see below. 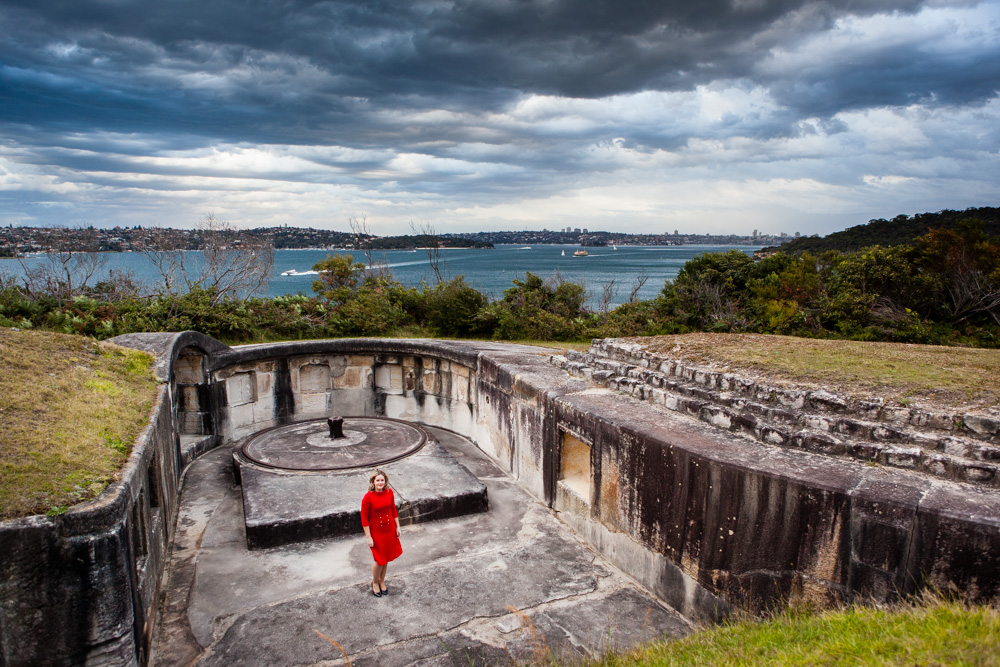 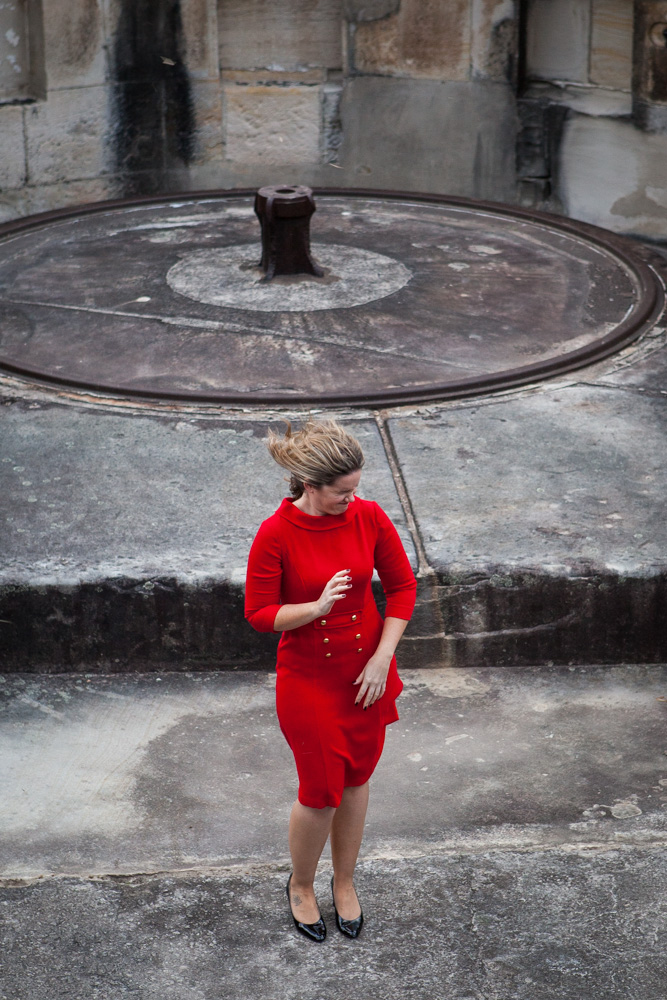 This is an awesome dress and great location.

Thanks Maria....I will certainly go back there for photos again!

It's stunning, I want one exactly the same! Yes, do wear it to work - you really have to show it off! If it feels a bit bright can you pair it with a grey or black jacket? Oh and also these photos are magnificent - does your brother by any chance give photography lessons?

That dress is beautiful. I love the back collar detail.

Thanks Sarah....me too, I love a sharp collar.

This is a lovely dress, I especially love the collar and button details. I think you should definitely wear this dress to work, even if you made it in a drab colour you would still stand out because it's such a great dress

Thanks Kristy...I think I will debut it next week at work....although might need to buy some smooth underwear to wear with it, it doesn't hide the bumps too well!

Wear it! It's beautiful. Have you a blazer you could wear it with to ease you in?

Good thinking. Maybe it's an excuse to make a little cropped vintage style jacket to match. :)

You look great in red. It suits your skin tone and hair, which are similar to mine. Just pair it with a cardigan and necklace to tone down the red for work, then whip it off for Friday dinner and drinks :) You look great.

Thanks Christy. I think Friday at work could be a good time to start, especially if drinks post work are on the agenda! I need to get myself a lovely looking vintage brooch to really set it off. :)

Well Bec I definitely want to see you in this dress at work - I'll keep asking you about it until you wear it. It's wonderful and shows how very talented you are - as usual!

Haha thanks TC! Majority seem to think it wont be too full on for work...thankfully our corporate colours aren't red. :)

This is a show stopper! You've got a lovely fit happening here and the colour just pops. Total work wear!

Thanks Amanda, I think I will be brave and wear it. Thankfully the corporate colours aren't red!

This is gorgeous! The fabric looks beautiful, and I love the points on the collar at the back so much. Your photos are great, and I feel your pain re the weather - the heavens opened on me yesterday when I was taking some blog photos!

Thanks Lynne...I know, blog photos are so weather dependent. You dont want to have to take them indoors so you normally have to expect a 50% change of having to take a rain check!

I love it!! Absolutely wear this to work!

Thanks Tasha - I think enough people have said its work wear that I will take the plunge!

Wear it to work for sure! Beautiful job on this dress - it looks great on you!

This is stunning, so gorgeous and the perfect shade of red! Wear it ALL the time as it looks so fab on you. Fantastic location, many a movie scene has been filmed there so it seems fitting to bring some style to it.

Thanks Susan....it's a great place for photos, I love discovering new places when looking for photo spots!

I also made a very red wool dress with 3/4 sleeves for work and was nervous to wear it because it was so very....red. Anyway I went ahead with it and after wearing it once or twice it didn't feel so attention-grabbing anymore.
How do you find the sleeves? I find the 3/4 wool sleeves on mine pull the shoulders down when I bend my elbows. Do you have this problem too?

Oooooh do you have photos!? I have only worn it once and not for a long time so I haven't felt anything with the sleeves but I could see that happening actually. Will be interesting to see how I go. I love 3/4 sleeves but they can be a bugger if you want to wear a jacket or cardigan over it and the sleeves bunch up the arms when you put the jacket on.

That dresses is amazing! I love the 60s cut and buttons are so perfect. I love it!!! I reckon you could post this on We sew retro! Now as for the whole wearing to work thing - I have the same phobia of wearing my bright, highly patterned things to work. But when I do wear them I get tonnes of compliments and by the end of the day I feel pretty spesh. I guess cause it's bright red, just wear it with simple hair, make up and accessories so that there is nothing competing with it. In addition, it's always surprising how much people just don't mind what your wearing and if they care a little too much to the point of being nasty, then who really cares what they think cause this dress is totally amazing!

Thanks Catherine....I think this dress is so you! Now when I sew 60's style dresses I think of you and your amazing pieces. You are so right, generally I dont care what people think but sometimes I get a bit shy and worry about pushing the boundaries too much....as you dont see too many people dressing out of the ordinary in financial services. Maybe i'll have to be the first! :D

This is absolutely gorgeous and I think you should definitely wear this to work. It shows a lot of personality and your great sense of style.

Thanks Wendy, so nice of you to say...I'm going to wear it to work me thinks! :)