How is it almost August already? This year has flown by so far! I woke up bright and early this morning to watch the opening ceremony of the Commonwealth Games in Glasgow, Scotland. For those unsure, the Commonwealth Games is a smaller scale version of the Olympics in which countries within the Commonwealth can compete. Australia normally dominates because well, we are awesome. It is always interesting watching how countries showcase their national icons. I think my favourite of this Scottish ceremony was the huge dancing Tunnocks Tea Cakes. A food icon in Scotland. Hilarious! 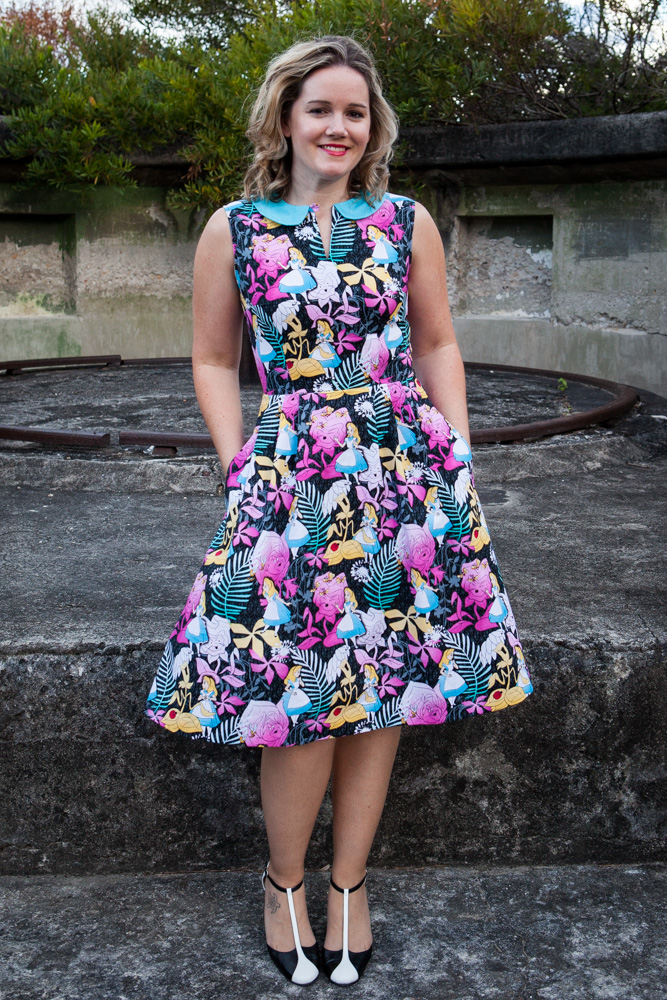 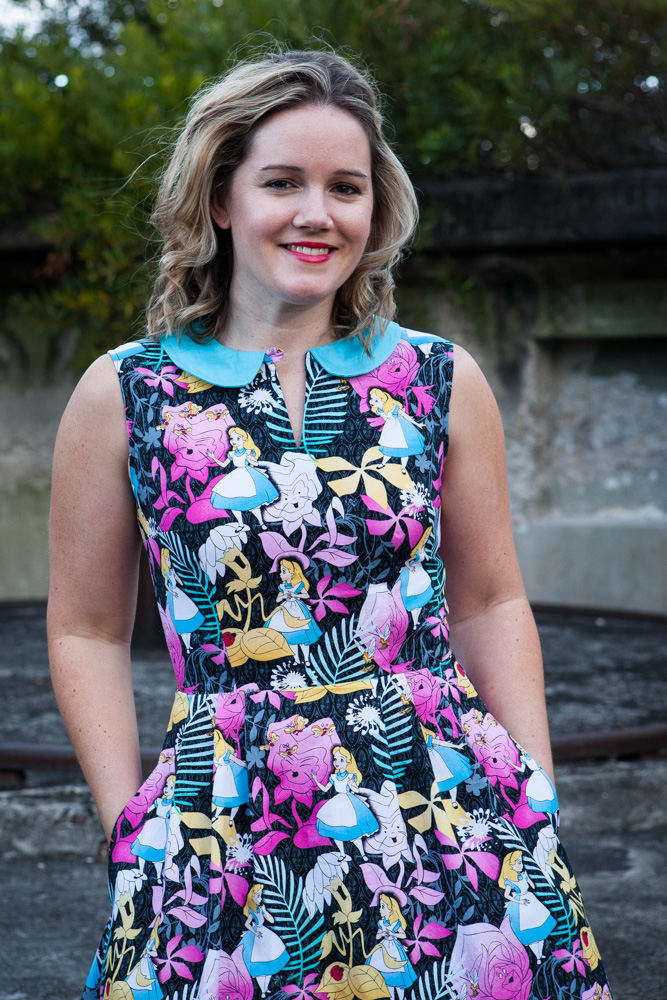 At least the one good thing about the year flying by is that it is getting closer to Spring/Summer in Australia and I can start thinking about Summer sewing makes. Not to say I haven’t continued making Summery style dresses throughout Winter. This dress would be case in point! I can at least say that I made a coat, so I feel like I accomplished some Winter sewing. Hopefully I’ll get the coat up on the blog before it is actually Summer. I made this dress because I couldn’t wait any longer to dive into my big fabric stash I brought back from my Vietnam trip in April. Check out the fabric shopping here. The fabric is a cotton with Alice in Wonderland print. It’s outrageous but I love it. Every time I look at the fabric I remember the experience of buying it. It was at the end of my trip and I had got so used to Vietnamese prices and bartering that I was trying to get it for less than $4 a metre as I thought that was expensive. I quickly had a reality check on real fabric prices when I got back to Australia. 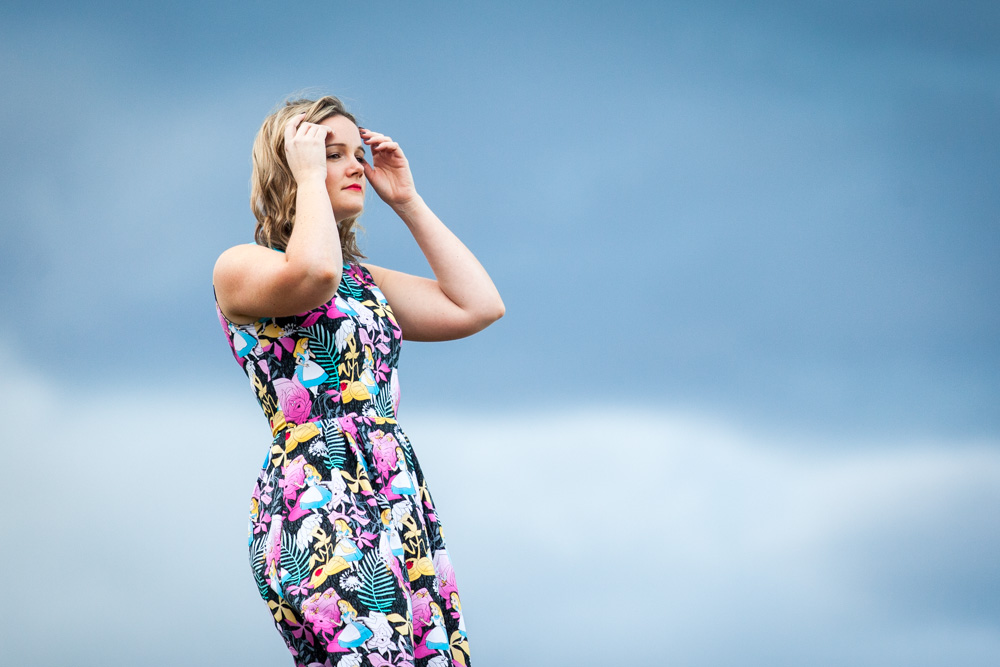 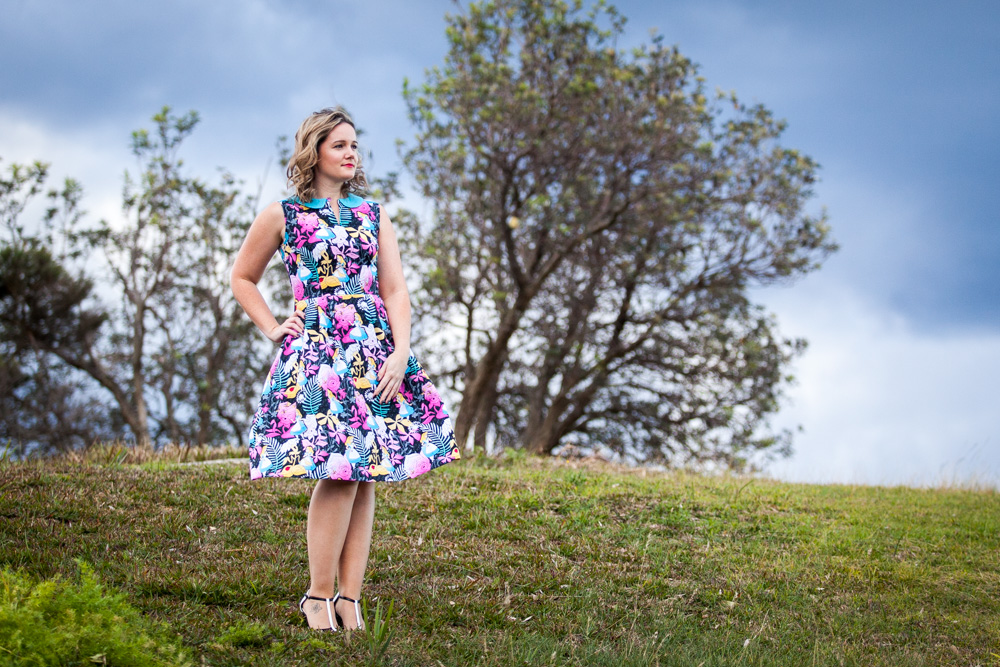 I used pattern Simplicity 1419 for the dress which is one of the Lisette patterns. I’ve always had great success with this line of patterns and they are definitely worth a look in. The pattern has a full pleated skirt, sleeveless (although you can do a short sleeve) with a peter pan collar. I opted for sleeveless so I can easily wear cardigans over it as cap sleeves are sometimes a bugger to fit under a cardigan without them all scrunching up. I took a bit of a risk with this one and cut out a size 10. I normally err on the side of caution and do a 12 but I wanted this pretty fitted and at worst you can take out the seams. I find Simplicity patterns have so much ease you can afford to size down sometimes. I made no alterations to the pattern except added about 1.5 inches to the skirt when I cut it out so that it fell below the knees. 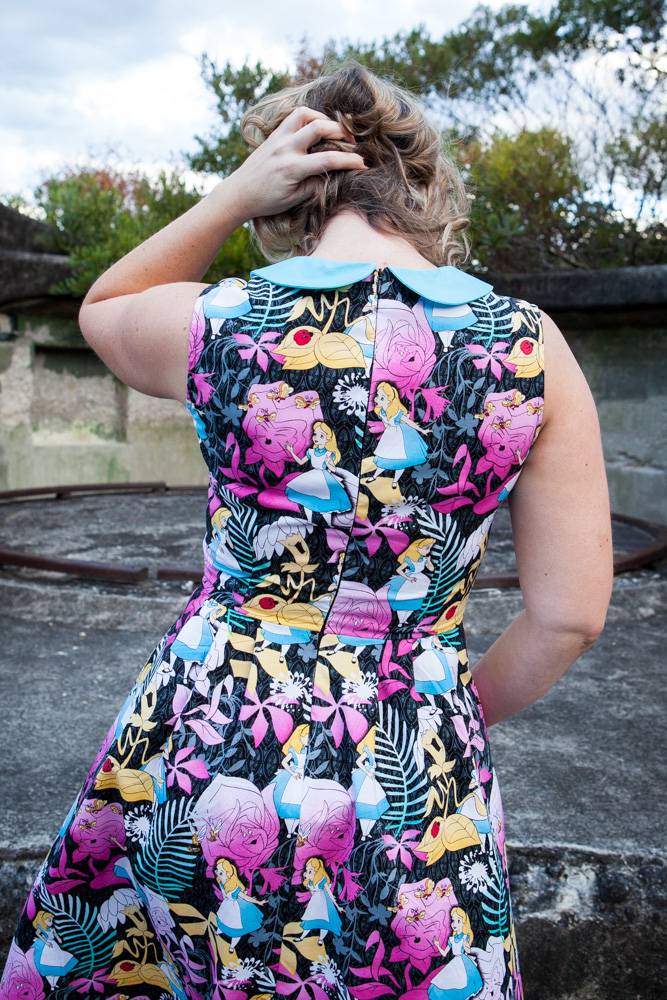 This was a great straight forward pattern to sew up and I think I actually got most of it finished in one day. I used black bias binding to finish off the arm holes and opted to use contrasting quilting cotton for the collar so it stood out amongst the crazy print. They give you a pattern piece to cut out the loop for the button hole on the neckline but I actually think a threaded loop would have been better and less bulky than the suggested way of doing it, especially if you are using a sturdy cotton. I found that the peter pan collar didn’t sit flush down on one side either so I did a little bit of stitching underneath it to the bodice to keep it lying flat. 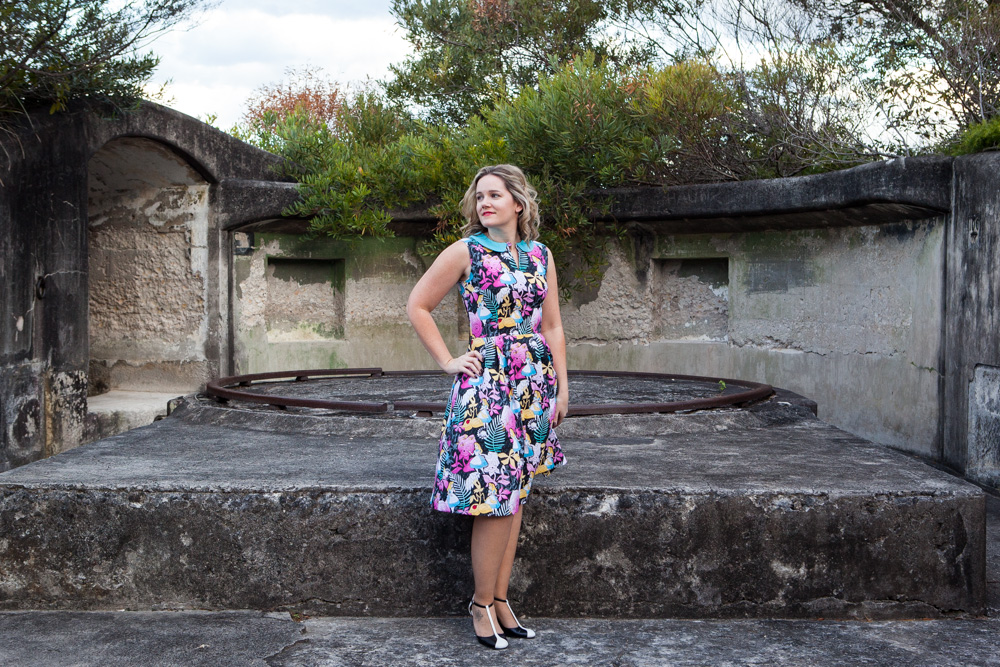 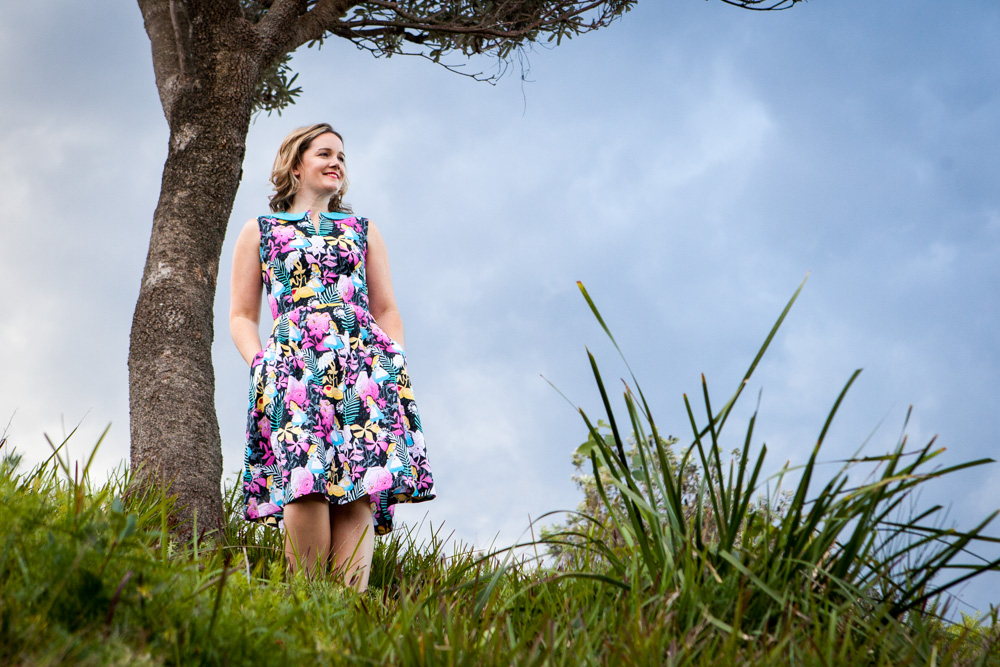 I think this dress would look fabulous with a petticoat underneath it….especially a hot pink one! 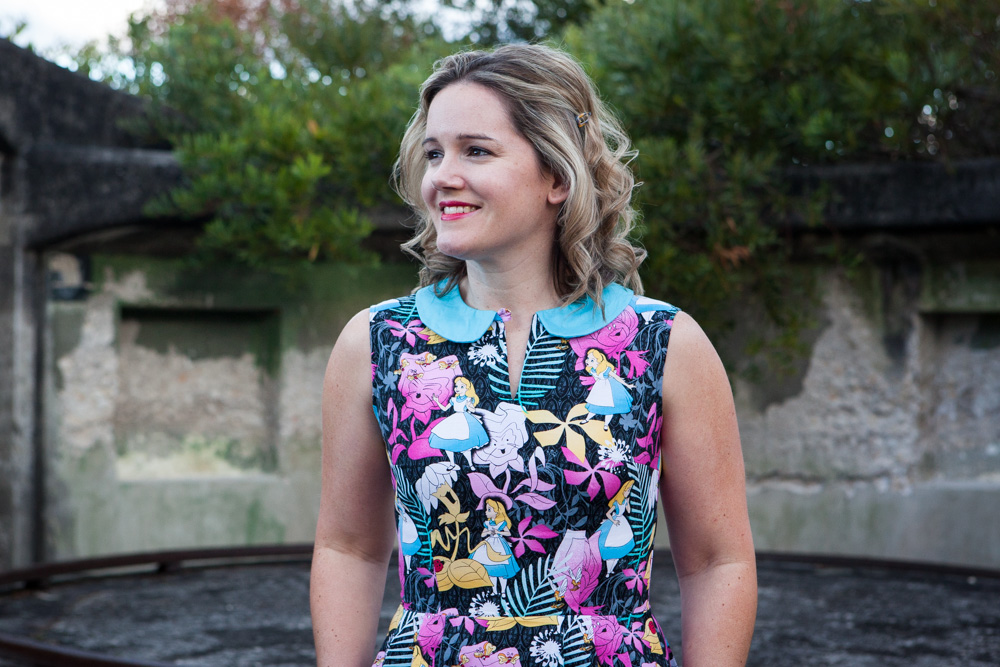 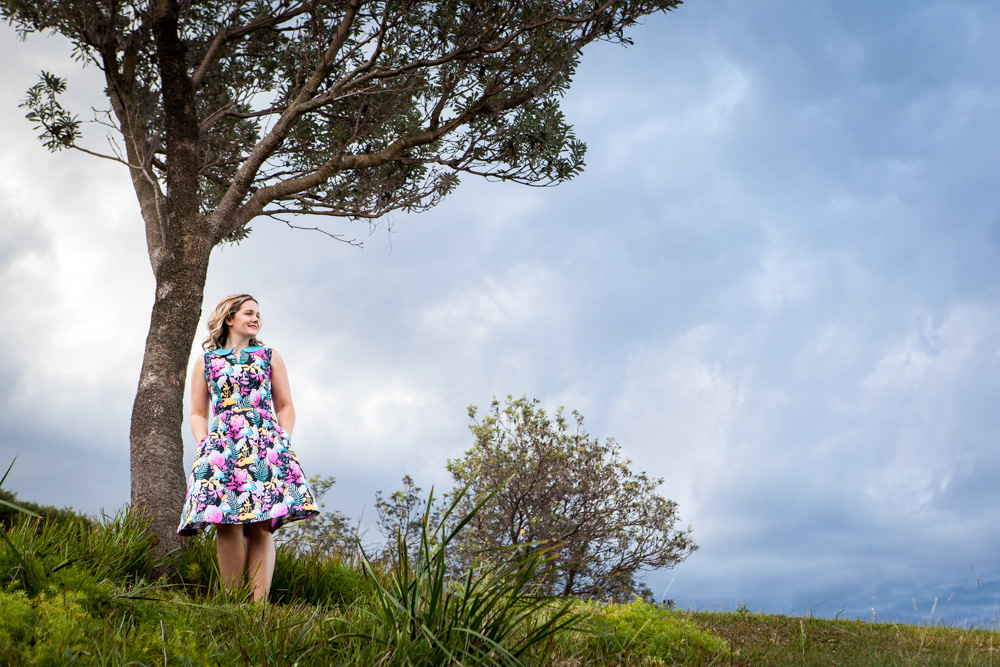 Love the colours. I traced this pattern off this week (I traced the 12, perhaps I should have done 10?!). I got some fun printed cottons in Thailand last year for $3 a metre and now I keep thinking I should have bought an extra metre of most of them at that price ;o)

Thanks Colette! I think it's always better to err on the side of caution and cutting out the size 12 you can always take in. I'm so like you - I wish I actually bought mroe fabric! At the time it felt like I bought heaps and spent a lot and whne I came home and did the sums it was barely $100 for like 10 outfits worth of fabric. Oh well... :)

This is ahhmazing! love the fabric it's wild, and once again location and photos are divine!

Such a beautiful and vibrant print!! The dress fit so well on you.

Regarding prices of fabrics, I'm also used to indonesian prices and could get pure silk for only 7-10 dollars/m and I still consider that expensive until....I tried to shop for fabrics online, browsing american and european fabric webstores...hahahaha. I've decided to stick to buying fabric from fabric markets here from then on.

Thanks Keifu - you're lucky you have access to the fabric markets and those bargains! It is A LOT more expensive in Oz. Maybe not such a bad thing as I would have a ridiculous amount of fabric if it was cheaper.

LOVE THIS FABRIC!! I have this pattern in my stash, but I haven't seen too many versions of it popping up in blogland. This has definitely got me inspired, though :) So cute!

Thanks Ashley - it's a great dress pattern, you'll love making it up. :)

Love the dress it'll be a great one to wear to celebrate the commonwealth victory! Though we are in the lead at the moment (I'm English)! It's a shame we can't compete as Great Britain. I'm off to Glasgow tomorrow to soak up the atmosphere.

Thanks Mags...enjoy the Games, I wish I could see some of the events! The time difference to Austeralia is brutal so I haven't been able to see much...although I have seen enough to see we are now leading the medal tally :D

I landed on your blog via Pattern Review, and I thought I'd pop over to say how beautiful this, and all your other sewing projects are! :-D

Damn, this is one freaking awesome dress- the fit is fabulous and the fabric is delightful!

Thanks Amanda - I do like me a loud print!

The dress is adorable, and the shoes are WICKED! Perfect together.

its been a long time (very long time) since i have sewn a dress (think im looking at 20 years plus) for myself.. Is it a easy straight forward pattern to sew? i have a wedding to attend in November (hunter valley) and wondering if it would be appropriate to wear something like this? and then what type of fabric do I need to aim to buy?

Hi Elisha - I think this could be a good option as a dress to start with because it's unlined and sleeveless - so it takes away the trickier parts of dressmaking to ease back into it! A good option :)